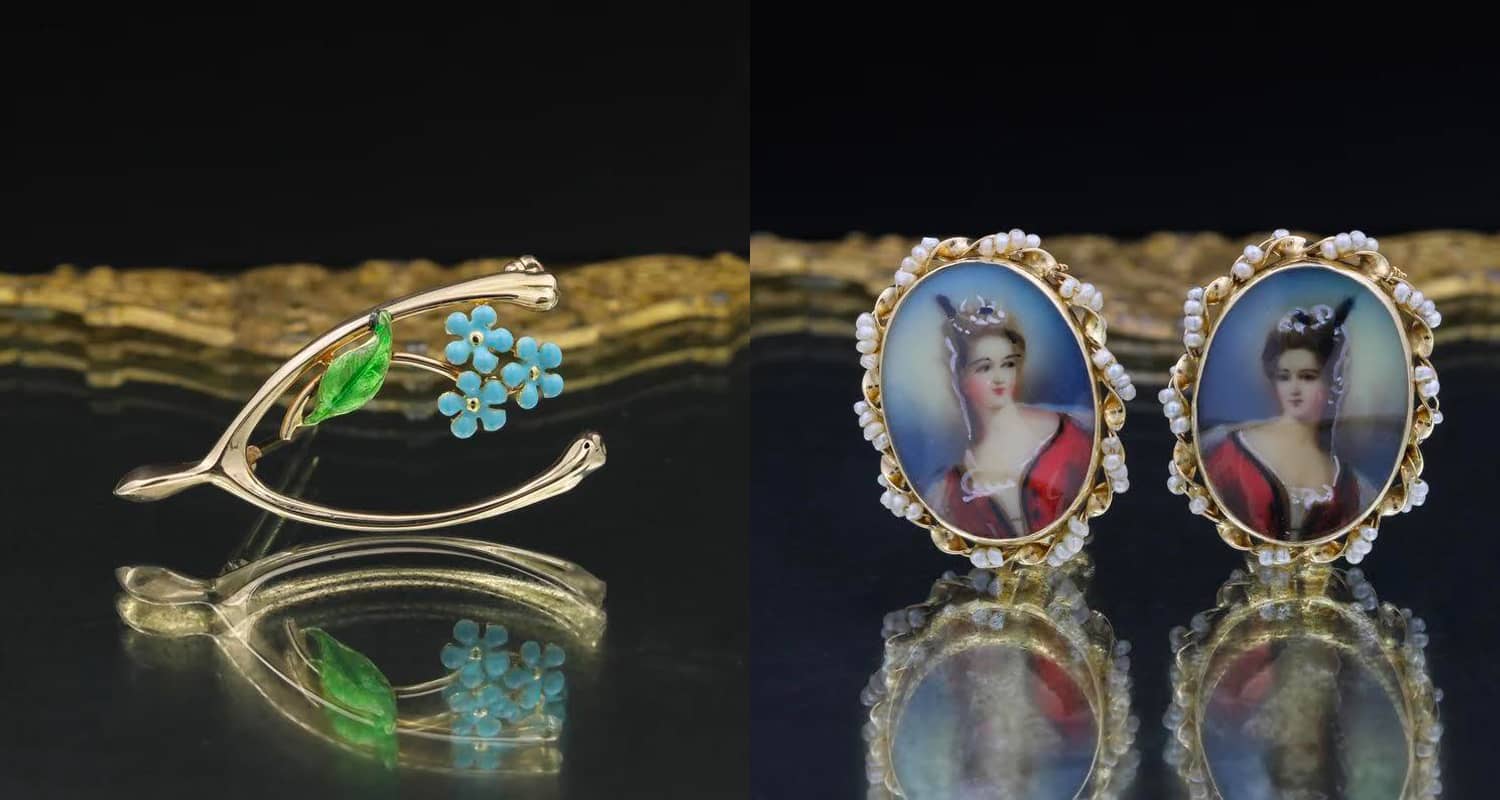 In a distinctive departure from the industrial revolution in Europe, the guild revival movement, known as Arts & Crafts, breathed new life into the business of designing and making jewelry. Suddenly, out from under the drab and lackluster tradition of mourning jewelry, a riot of enameled color, glimmering cabochons, and sinuous design gripped the imaginations of a particularly ambitious group of artistically minded individuals.

The rejection of any use of traditional jewelers and manufacturers was a requirement of the proponents of the guild system. The theory held that this rejection would lead to handmade items of beauty that relied only on their design and not the intrinsic value of their component parts for their esteem. Specialization by crafts-persons went against the principles of the Movement, each piece was to be made by one person from beginning to end. All of these elements were aimed to keep costs affordable to the middle class. A hammered texture was popular for its softer luster and its departure from smooth, shiny, machine-made counterparts. Baroque pearls, mother-of-pearl and odd “toothy” freshwater pearls were used often. Stones such as moonstone, turquoise, garnet, opal, and amethyst were usually cut in cabochon and generally collet-set.

Hand-painted enamel as a decorative element was an important mechanism for separating the handmade from machine-made. The use of leaves was an often employed distinguishing design element. So unique was the variation of leaves used by different artisans, they can sometimes be interpreted as proof positive of the maker’s identity. Medieval and Renaissance styling was the overwhelming design motif with necklaces, pendants, clasps, and buckles the most popular and useful items produced.

Arts & Crafts jewelry was generally very practical and less frivolous than its predecessors. Cloak clasps, belt buckles, and belts were produced in the style with enamel and gemstone highlights. Hair ornaments were more likely to be elaborately carved horn or ivory combs than diamond-studded tiaras. The few tiaras that were made in the Arts & Crafts style were naturalistic designs with enamel rather than precious gems. Very few earrings were produced, at least in part because earrings were not prominently in vogue at the time. Necklaces were the most important adornment and they often consisted of chains that were swaged, looped and festooned, suspending pendants with enamel and cabochon gem decoration. Enameled insects, flowers, and leafy plants were a common motif for brooches. Bracelets often alternated medalist-style plaques with chain links, ribbons and flowers. Carved metal stylized feminine motifs and wrap-around insects and plants clutched cabochons to form the few rings designed in the Style.

The movement waned in the pre-World War II era and the guild movement all but disappeared after the war. Individual artisans continued to work in the Arts & Crafts style, adapting their work to the changing tastes and breaking new ground with metamorphosis into the Modernist Movement. Independent jewelers, working in a handmade style using techniques taught during the height of the Arts & Crafts movement, have continued to produce popular jewelry without the support of guilds and societies dedicated to the idealistic revolt against machine-made goods.