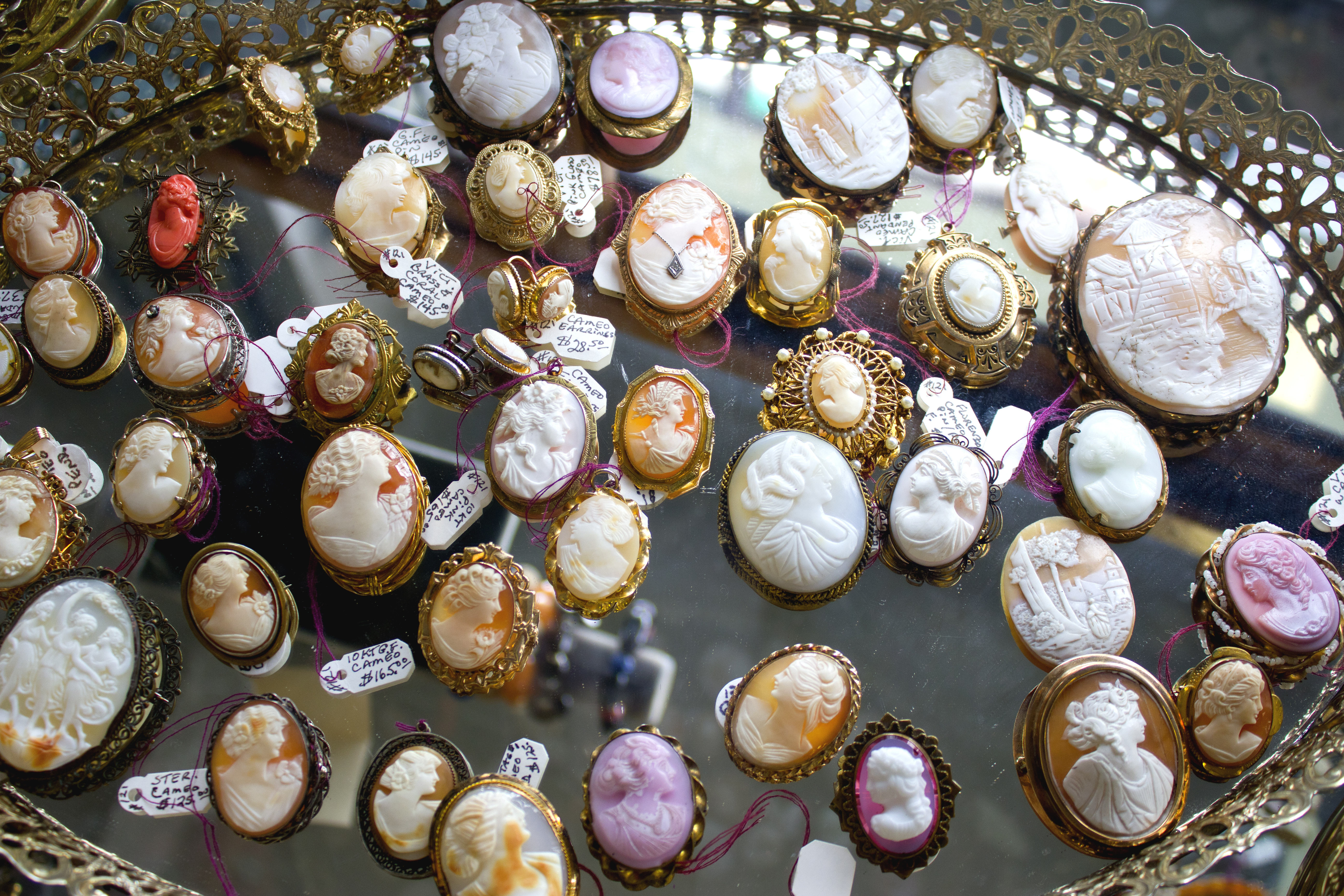 Cameos, or carved profile portraits, have been used as decorative accessories since Ancient Rome. However, they made a huge comeback during the Victorian period, and they are still popular among many jewelry enthusiasts.

A cameo is a hard stone or precious gemstone—often agate or onyx — onto which reliefs are carved. These raised relief images show figures, most notably profile portraits, projecting from a supporting background. Today, imitations include reliefs carved in glass called “pastes” or mollusk shells, a practice popularized by Queen Victoria of England.

The History of Cameos

Cameos have been used for a variety of purposes throughout history. The first iteration of cameos can be traced as far back as 15,000 B.C., where ancient civilizations in Egypt carved figures into rocks to record significant events. Since, they’ve been decorated with a wide range of carvings, representing everything from mythological and biblical beings to status and prestige. Authentic cameo pendants are still highly valued and collected today, leading to waves of unique interpretations of this quintessential vintage jewelry staple.

During the 20th century, as costume jewelry became mainstream, inexpensive replicas of antique cameo jewelry made out of shell and plastic emerged. Today, a vast array of cameo types are available on the market, with contemporary designers borrowing from antique designs.

What Makes a Cameo Valuable?

Cameos are valued for their fine craftsmanship, materials, and age.

The most exquisite cameos are those made from semi-precious and stone materials. Agate is one of the most popular since it’s difficult to carve and requires significantly more talent to make. Cameos made of stone will outlast those made from less expensive shells or plastic.  When examining the carving on your cameo, it’s best to hold it up to a light to ensure there are no significant cracks. Cameos, with three or four layers of agate color and a metamorphic image, which includes several subjects, can be incredibly valuable.

Furthermore, cameos carved in colored stones like opal, lapis, and emerald are rare and highly valued. A simple way to test a cameo’s material is to place a hot needle against the piece. If it begins to melt, it is made from plastic. If not, it’s likely authentic.

Like many vintage or antique collector’s items, it is a cameo’s rareness - not age - that primarily determines its value. For example, though the Roman Empire predates the Renaissance, Renaissance cameos are considered more valuable as there were far fewer produced during this time.

A cameo’s setting, or framing, can help determine its age and value. Remounted cameos are considerably less valuable than those in their original antique settings. Settings vary based on the era during which a cameo was produced. For example, Victorian cameos are often set in confined, simple frames, whereas jeweled and pearled frames became famous later.

The type of metal in which a cameo is set can indicate when it was made and establish its potential value. If a cameo is set in a pinchbeck mounting (made of an alloy of copper and zinc resembling gold), it was likely created between the early 18th and mid-19th century. Gold electroplating wasn’t patented until 1840, so all cameos in plated settings were most likely carved after this time.

How Can I Identify an Authentic Cameo?

Carefully examine a cameo for cracks. Authentic cameos should have no visible chips or cracks in the foundation material. A genuine antique cameo may have been damaged after years of wear and tear, shell, stone, and porcelain are more durable than plastic, so any cracks or crazing should not be noticeable to the naked eye.

Details, details, details! If you have an authentic cameo, its high-quality carving will be noticeable right off the bat. Cameo creating artists paid close attention to every bit of sufficient detail. Exquisite cameo carvings include images with textured hair and loose curls, flowers, and even jewelry on some female portraits.

Consider the setting. If the cameo in question is a brooch, pay close attention to the pin on its back. An antique cameo brooch should have a “c-clasp,” which means the brooch pin loops under a crescent-shaped piece of metal to hold it in place.

Know your materials. Authentic carved cameos are made from natural materials, such as shell, agate, onyx, ivory, coral, mother-of-pearl, and various gemstones. Genuine painted cameos are typically made from porcelain. If the cameo in question is made from plastic or resin, it is a fake.

Test its hardness. Gently tap the cameo against your tooth and listen to the sound it produces. If it sounds dull or hollow, it is likely made from plastic. In contrast, a cameo that looks fairly solid is probably made of stone or another natural material.

Pay attention to the direction of the profile portrait. The figure on the majority of antique cameos will face right. However, many imitation cameos face leftward or forward. While e figure’s direction alone is not a definite indication of authenticity, if you’re already questioning a piece, this little clue can give a bit more insight.

Check for carving marks. If you inspect the front of a cameo with a magnifying instrument or jeweler’s loupe, you may see faint carving marks around the relief. These are little indentations made from carving tools and indicate the piece was hand-carved. Plastic cameos are typically carved with lasers, so they have a more uniform, smooth look.

Cameo jewelry is a timeless antique that continues to flourish in the market today. With a plethora of vintage and contemporary designers creating reimagined versions of classics, we are afforded the ability to continue to purchase these beautiful pieces at National Rarities.